When it comes to electric shavers, Braun are the internationally recognised market leader. Based in Frankfurt, Germany, they first started making electric shavers way back in the 1950s – and they had only waited that long to produce it because production was delayed due to World War Two. They first designed the electric shaver in 1938! Today we shall be taking a look at one of their market leading products in this Braun Series 7 review.

Since then, the business has been acquired by Gillette – world leaders in men’s razors. With these two companies combined, it is no surprise that they have been responsible for some of the most popular men’s electric shavers that have ever been produced.

The Braun Series 7 range is one of the most premium options when it comes to their current offerings, with only series 8 and series 9 surpassing it in terms of price. As you will have already gathered, just the Braun range alone is quite a minefield, with so many options at different price points – it is very difficult to know whether you are getting the best one for your needs.

That’s where we come in. Let us walk you through it all in our Braun Series 7 review. First, we will look at what you receive when you purchase one, then we’ll focus on the features of the shaver before putting it to the test. We will also have a quick look at the pros and cons of the Braun Series 7, before acknowledging a few other options and delivering our verdict.

What’s In The Box?

There are a few different models in the Series 7 range, but the only difference between them is what accessories you get with it. The razor is 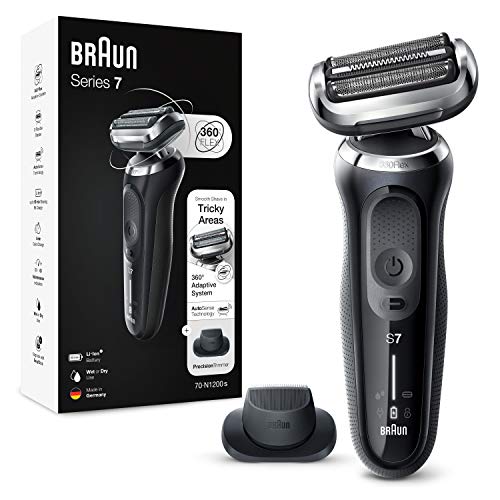 always the same – the Braun Series 7 electric razor for men. 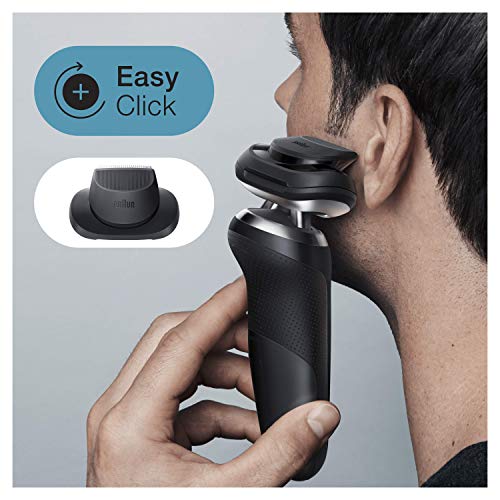 Before we get into exactly what the Braun Series 7 offers from a practical point of view, let’s take a moment to consider the aesthetics. It is a really nice-looking shaver – sleek and stylish in design, measuring just 16.5cm in length. It also weighs just 185g, so it is perfect for travelling with.

The shaving head makes up a lot of that weight. It is quite substantial, measuring 6 x 3.5cm. The reason for this size is that it needs to fit the three flexible blades within it – a main one in the middle for trimming, and two sensor foils on either side.

The head is very clever in that it has a “360° adaptation”, which is designed to allow for a smooth shave, even in the more difficult areas. The idea is that you get the same level of contact everywhere.

They also have AutoSense – a technology that adapts to different densities of hair. If you have some areas of your beard that have thicker hair, the razor will automatically adjust to meet the requirements of thicker hair. 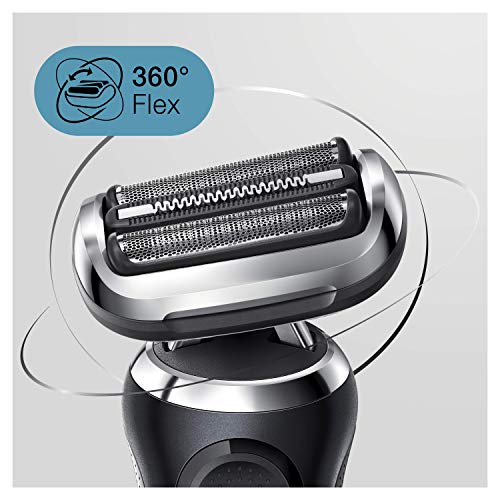 As you will have noted from the ‘What’s in the box’ section, you also get a Precision Trimmer with the Braun Series 7 70-N1200s. This easily clips onto your shaver to replace the head with the Braun Easy Click system. There are other attachments that you can purchase, which would mean that this one razor takes care of all of your shaving needs.

Now the battery: It is a Li-Ion (Lithium-ion) that takes around 1 hour to charge. This will give you around 50 minutes of charge, so you will probably find that you only need to charge it every couple of weeks. If you forget, however, there is also a ‘quick charge’ that you can give your shaver, which will take five minutes and you’ll then have enough charge for a shave.

There is also a LED screen on the front of the shaver which tells you how much battery is left, as well as a Travel Lock light (for when that mode has been activated), a cleaning light (which will light up when it needs a clean) and a light which will tell you whether it is charging.

Finally, the Series 7 is completely waterproof, so it can be used in the shower.

So that’s what it can do, let’s put it to the test.

Now, before we start it is advisable to manage expectations a little. As an electric razor, it is never going to get as close a shave as you get with a wet razor – it just isn’t possible.  What you do get, though is a convenient, quick and easy shave, which shouldn’t aggravate your skin. As someone with particularly sensitive skin, this was what I was really looking out for with the Series 7. 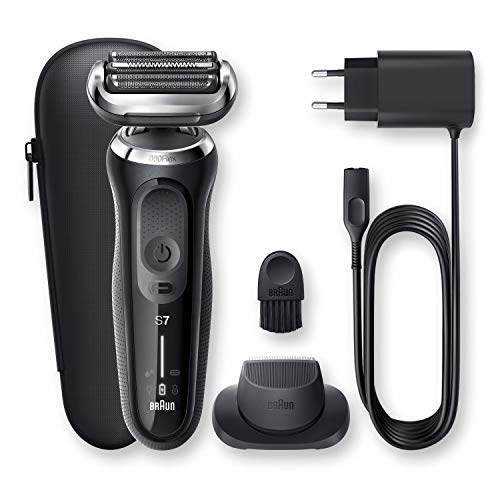 With that in mind, when I first picked this electric razor, I was taken by how comfortable the rubber grip was initially – a small thing but something you should look for if it is something that you will be using regularly.

On to the shaving – I have to say that it was a very comfortable experience all round. I didn’t feel any nicks at all, which does usually happen to me with an electric razor. Those sharp, painful little nips just didn’t happen, which was great.

I found that I had to go over a couple of areas of my face a few times to get all of the hairs, but you expect that with an electric razor. It wasn’t much of a chore, and as I wasn’t getting any nicks, it didn’t bother me at all to go over the same bits.

The biggest thing that I noticed, though, was the speed at that I had completed my shaving. It must have taken two minutes, at the most. Compared to the rigmarole of a wet shave, this was incredible. 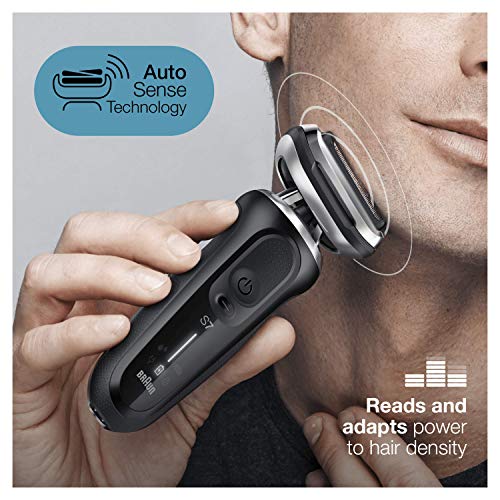 The next big thing that I noticed was the following morning – I didn’t need to shave. The shave from the previous day was so close that I decided I could go a day without shaving. Better still, I didn’t have any kind of rash or marks from the original shave – my skin was clear of hair and redness.

In terms of maintenance, it is a breeze. The little brush is handy to just wipe the head clear of hairs. The charger works well, and the indicator on the front of the unit means that you always know when the battery is running low.

I have tried it in the shower since, and it is still good, but I found it takes slightly longer – presumably because the water sticks my hair to my face, making it more difficult for the shaver to pick them up.

Pros of the Braun Series 7

Cons of the Braun Series 7

As we mentioned in our introduction, the electric shaver market is flooded with different options – here are a few more to consider if you are looking at the Braun Series 7.

Braun Series 9: An obvious place to start – the Series 9 is the premium Braun offering – advertised as the “World’s most efficient electric shaver”. This comes at a price, of course…

Philips Shaver Series 9000: Another fantastic shaver, this time from Philips. This boasts an AI sensor that will tell you whether you are pushing too hard or too little. It even tracks how you shave and gives you tips via an app!

Braun Series 5: A more affordable option from Braun, the Series 5 doesn’t have quite the same quality as the Series 7, but it does come at a lower price. A great option if you don’t shave daily.

You will have probably gathered that we are big fans of the Braun Series 7 electric razor. It is incredibly well designed and, more importantly, it performs excellently. It offers you a speedy shave that will be nick-free and result in a smooth face. What more could you ask for?

All I will say, though, is that at the price, this is probably only for people that shave four or five times a week, or more. Anything less than that, and it would start getting difficult to justify the price of this over, say, the Series 5 that will do a great job too.

But if this is within your budget, it is worth your strong consideration – I’m not sure it can be beaten by the other razors at this sort of price.

BaldBeards is a website dedicated to bringing the very best male grooming advice to the masses.